It might sound trivial, but naming conventions are significant factors when you're developing business applications. A systematic way of naming files, tables, fields, etc. provides a high level of organization, consistency and efficiency to both app developers and users. A good naming convention also allows an app to be easily adaptable, scalable and transferable throughout its useful life. These benefits all apply for apps developed within Claris’s FileMaker Platform.

What's in a Name?

We've talked about naming styles in the FileMaker Platform. As with William Shakespeare's Romeo and Juliet, names matter. And despite Juliet's argument that “a rose by any other name would smell as sweet,” a name is equally as important as its substance as far as FileMaker custom apps are concerned. In fact, the wrong use of a name can turn a fragrant bud into a real stinker.

Unlike many other development platforms, FileMaker does a good job of insulating developers from some of the tedious aspects of development, including names. We can name files, tables/table occurrences, fields, layouts and scripts pretty much any way we like as long as we don't tread on these no-nos: 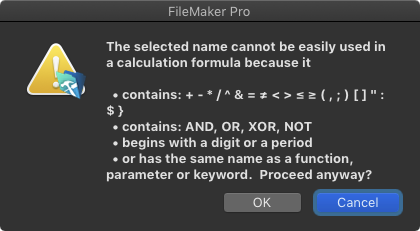 We can easily change the names of things – with the exception of layout objects, variables and names created in a calculation – on the fly without any fear of ill effects. But just because you can do something, that doesn't always mean you should, especially with FileMaker.

We will first talk about an essential aspect of a naming convention and that is the schematic. It's best if you stick with the naming scheme you choose. If you decide to change the scheme, you'll want to go back and update all previous name occurrences. For example, you could name a portal object "portal.parts," "portal:parts" or even "portal_parts" as long as you've similarly named other portal objects. But if you decide to name some objects "portal.parts" and others "portal:components," you're bound to get frustrated at some point. When a Refresh Portal script step fails, it could be that you're assuming your portals all follow similar naming patterns. Because not all things in FileMaker get included in type-ahead, it behooves us to be consistent.

What Schematic to Use?

The controversial part of naming conventions is deciding what schematic to use. It sounds simple enough, but we've seen heated debates over this type of decision. A low-code development platform like FileMaker attracts problem solvers of all kinds, from highly-skilled technical programmers like engineers, solution developers and IT professionals to non-technical accountants and soccer coaches. As a result, there is a broad range of opinions as to the naming convention that makes the most sense for different users. Let's say we want to name some fields in an application. A real estate broker may prefer to use spaces to name the fields, i.e. "Last Name" and "Invoice Total." A FileMaker developer would probably avoid spaces and name the fields using camelCase or an underscore, like so "lastName" or "Invoice_Total."

The naming convention doesn't just provide consistency, but it can be a helpful organizational tool. Some programmers like to group their fields based on their function, so they might put "g" in front of their global field names to distinguish them as in "gLastInvoiceDate." Some folks like to call out their primary key fields by naming them with an underscore (_) in front of the name. This way, they sort at the top for easy access in the field picker. Whatever your reason for your convention, whether it's based on comfort, speed, aesthetics or the direction the wind was blowing when you came up with it, use it and use it consistently throughout your solution. 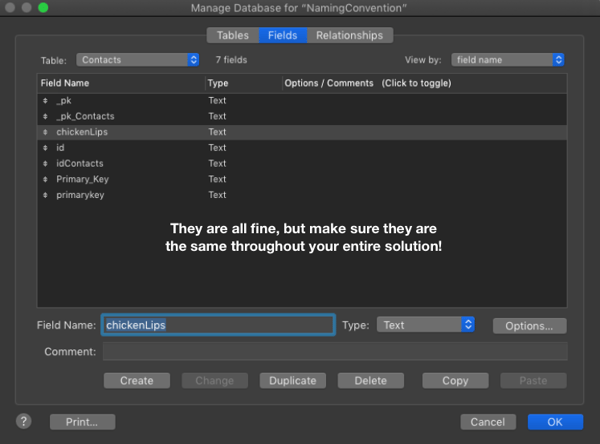 Haters are going to hate, so understand that few developers will agree with all the choices you make when it comes to naming conventions. Nonetheless, we can all agree that there needs to be one. So make sure you come out smelling like a rose just by being consistent.

If you need help cleaning up your naming conventions or any other type of FileMaker support, feel free to contact us. Find more FileMaker design tips, including how to create calendars and how to use Material Design icons.

This article is also posted on FileMakerProGurus.com.