FileMaker Server 17 ushers in a new age of server administration. Since the release of FileMaker Server 13, we've relied on proprietary Java framework, which was a little heavy for the simple task of administering a server. Now, FileMaker Server has moved to a standards-based, web-only administration interface that is as dynamic and responsive as any modern website. This isn’t our first glimpse of this directional change as many of us have been using a slimmed-down version of this interface with much success in FileMaker Cloud for over a year now. It's elegant, fast and intuitive. Having said all that, creating a whole new tool that allows you to perform all the tasks required to administer and deploy a database/application server is quite a Herculean task. In order to accomplish this without disruption to the user base, FileMaker, Inc. has decided to move in a more evolutionary direction rather than a revolutionary one

previous versions of the Server Administration Console, FileMaker, Inc. has set out to offer a basic set of tools that most folks need to get up and running without too many distractions and complications. By and large, they've succeeded astonishingly well. They've created a simple and informative environment that looks great and allows you to figure out how to get things done without getting in your way. 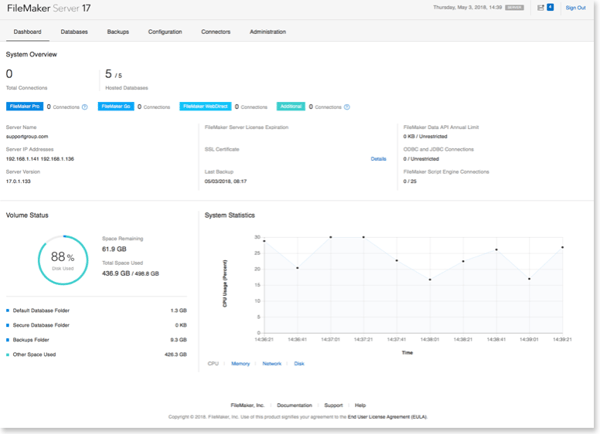 There's Always a "But"

All of this streamlined simplicity comes at a price. When your eyes slowly come back into focus after being dazzled by the new modern and responsive interface, you will start to realize that there are some important things missing. None of these omissions are dealbreakers for the vast majority of administrators – the ones who are just deploying to the server so that a few of their colleagues can use the cool app they just made. However, full-time or near full-time developers/administrators need to be aware of these missing options and their related functionality.

Here are just some of the controls you are no longer able to manage within the UI:

Learn more about the enhancements and changes in FileMaker Server 17 in the FileMaker Community.

Take courage intrepid administrator! FileMaker, Inc. hasn’t quite left us out in the cold. You can still control these settings and many others using the cool new FileMaker Admin API or the good old command line. For example, let's take a look at how we can turn on Custom Web Publishing using PHP with these alternative methods.

See what else is new in the FileMaker 17 Platform! Let us know if you're ready to upgrade to FileMaker 17.